Halloween Costumes Have Grown Into A Billion-Dollar Industry 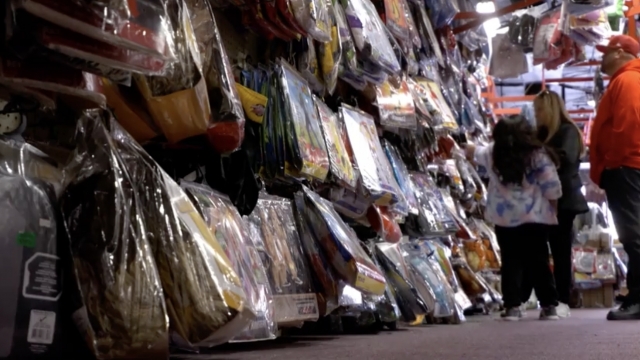 Americans spend big on costumes come Halloween, and the money is mostly going to adult outfits, not just kids.

The National Retail Federation, or NRF, expects this Halloween spending to return to pre-pandemic numbers, with customers spending more on adult costumes than those for children.

"Halloween has really grown as a holiday over the last decade, and a lot of that has been fueled by adult — particularly young adult — participation," said Katherine Cullen, senior director of consumer insights at NRF.

Americans are expected to spend $1.7 billion this year on costumes, a welcome number after the pandemic took a bite out of Halloween sales the past few years. But with COVID-19 vaccines making the pandemic more manageable, the NRF says more 18- to 24-year-olds will embrace the spooky tradition with the return of Halloween parties, Halloween themed bar crawls and haunted houses.

"I'm seeing a lot of people who are my age throwing parties or even going out to restaurants or bars during the night to celebrate," said Nikki Cristobal, customer at a Halloween store.

Bella Farkas is one of the managers at Chicago's Fantasy Costumes. The store has been selling a cornucopia of get-ups for more than 50 years, and not just during Halloween, but throughout the year. The store is full of adult costumes, but the kids' costumes are limited to one room.

"In the last maybe 15 years, that's when we had the change in here," Farkas said. "This was mostly just mascot costumes, and it just became such a thing for adults that we made this whole room for females."

Your Halloween Candy Will Cost More This Year Thanks To Inflation

The scariest part of Halloween this year might be the cost of candy. Prices have experienced their highest jump on record this year.

Farkas says they have two adult costumes for every one kid's outfit.

"The adults really like to accessorize most of their stuff if they're doing something elaborate," Farkas said. "The kids, some of them are so small they can't carry anything."

The practice of wearing Halloween costumes has roots in paganism and Christianity in the early part of the 20th century to ward off evil spirits. Some historians trace adults getting into the dress-up act to San Francisco's LGBTQ neighborhood, Castro, in the 1970s when gay people entered a children's costume contest for fun. Cross dressing was illegal then, and it was one night a year where someone could dress-up without breaking the law.

"I think because it's such a big holiday for many people across the United States, and it allows for your freedom of expression, I think just dress however you want to dress," Cristobal said.

Halloween, even now, is a way to dress up as anything or anyone, though more sexual costumes have started growing in trendiness since the 70s, as the gay Halloween parades grew combined with the rise of the sexual revolution.

The NRF says 70% of adults already know what their costume will be this year, but Farkas says for others, waiting until the last minute won't get the costume customers really want.