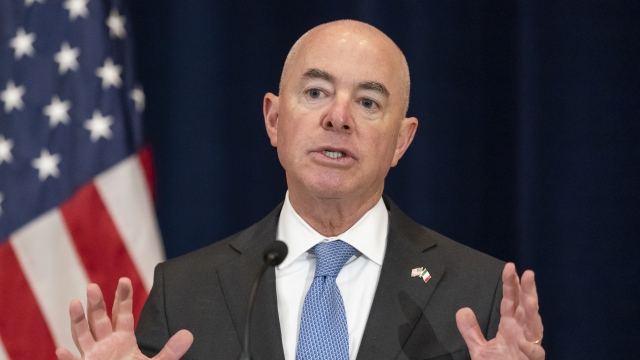 "I don’t think the 1.4 million removed or expelled would consider the border open," said Mayorkas.

"How can you say the border is secure, the American people aren’t buying it," said Rep. August Pfluger.

"I feel compelled to correct inaccuracies in your questions," said Mayorkas.

Republicans repeated the claim that the border with Mexico is open — which it is not.

But saying the record level of migrant apprehensions the border patrol faced in the last year is tantamount to that claim.

Department of Homeland Security statistics show the border patrol recorded 2.4 million apprehensions along the southwest border in fiscal year 2022. 37% higher than the previous year, bear in mind, crossings declined during the height of the pandemic. 31% have been released into the U.S. at the border.

What’s unclear is how many of those crossings were multiple attempts by the same individuals or "recidivism." DHS numbers for the previous year reported a "recidivism rate of 27%."

"Seeing a migration that is unprecedented," said Mayorkas.

A surge in migration from Venezuela, Cuba and Nicaragua in September brought the number of crossings to the highest level recorded in a fiscal year.

The Biden administration says the return rates are likely due to the public health order known as Title 42 used under the Trump administration and court order to continue under President Joe Biden.

Title 42 allows immediate expulsions back to Mexico because of the pandemic, as well as the Remain in Mexico Program where some asylum seekers must wait across the border as their appeals to become U.S. citizens play out.

Republicans also repeated a claim that known terrorists have crossed the border.

"What is your concern about the threat combination of this unmanaged wide open border situation and the threat from Al Qaeda and ISIS?" said Rep. Michael McCaul.

The claim without context sounds scary but it doesn’t mention the fact that authorities detained these people. Experts say many could have names that simply matched a federal database.

"But what we have heard is that a lot of the people who are on the known and suspected terrorist list are people who had been previously put on that list due to affiliation with Revolutionary Armed Forces of Colombia, the "Fuerzas Armada Revolucionarios de Colombia" a Colombian revolutionary group that was four years in a fight with the Colombian government," said Aaron Reichlin-Melnick, policy director for the American Immigration Council.

Democrats were eager to direct the hearing about White nationalist extremism, cyber security and above all reforming immigration laws.

"It is lawful for people to ask for asylum, given the laws that we have," said Rep. Al Green.

Republicans only wanted to talk about drugs and border security.