How One Woman Describes Living With Schizophrenia 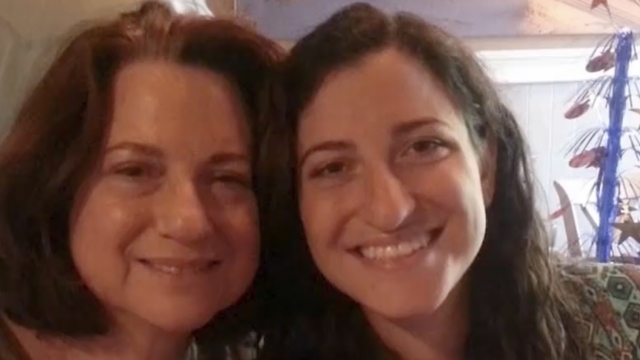 Michelle Hammer is a New York resident with schizophrenia, a serious mental disorder. She shares her journey.

Michelle Hammer wants you to know schizophrenia. To know the illness is to know her.

"I go, 'listen, no couches were harmed in the making of this video.'… People with schizophrenia can have a job or actually speak to people or can do things themselves," said Hammer.

Schizophrenia is a brain disease and patients' symptoms run a spectrum. They can include negative symptoms like social withdrawal or psychosis, when someone is detached from reality. Usually it looks like hallucinations: Seeing or hearing something that isn't there; or delusions: Fixed false beliefs that a person can't change.

For Michelle it began in her teens with paranoid thoughts about her mother. And again at age 18 with her college roommate.

It would be three more years before she was diagnosed as schizophrenic.

"Things were up, things were down. And I ended up in the psych ward twice my freshman year and once my sophomore year," Hammer said.

"Schizophrenia is a very serious psychiatric illness, but we can do a lot to help these people function and have a normal life," said Dr. René Kahn, the head of psychiatry at Mount Sinai's Icahn School of Medicine in New York.

He says Michelle's experience is more common for female patients.

RENE KAHN: Women in general have a better prognosis than men.

KAHN: One of the reasons may be that in women, it starts about five years later than men, meaning that their brain may have developed more and they may have matured more than in men.

THEIS: What are some of the biggest questions, right now, that are still out there? What are the unknowns that you're trying to answer, you know, in the immediate future, the next couple of years?

KAHN: The biggest question still is 'what is the cause or what are the causes of schizophrenia?' Because we don't know, and we really need to find out if we really want to cure the disease or prevent the disease.

With neither a cure nor prevention, doctors say medication is key for patients. That process is complicated.

Antipsychotic drugs are available to counter psychosis. But that is only one part of the illness.

Today Michelle's life includes daily meds and frequent psychiatrist televisits to make sure they work and she's still taking them. It also includes her partner, Carolyn. They married last year. And most recently, a new puppy.

"People kind of like treat people with schizophrenia — they're always wondering, 'who's your support team?'" said Hammer.  "They don't think you're independent at all."

THEIS: So no caregiver?

THEIS: Does the schizophrenia diagnosis impact how you guys are as a couple in marriage?

CAROLYN HAMMER: If we're talking and then like I say something and then I'm like waiting for her to respond, but she's talking to like somebody else instead, it's like, not bad it's just like annoying.  And I'm like, okay, I guess I'm going to say what I have to say again.

Curbing People With Mental Illness Away From Jail

Schizophrenia is rare. About 1% of U.S. adults have the mental illness. Compare that to one in five people who have an anxiety disorder.

But it reportedly shows up more often in the media. It;'s portrayed negatively and falsely, according to research.

THEIS: Was that 'Violence and a dangerous person' — is that common or is that more of the exception?

KAHN: It's absolutely the exception.

Since 2019 Michelle's recorded and shared video of her schizophrenic episodes. She wants to debunk the stigma that people with her illness are violent.

In them, she appears to speak to someone off camera — except no one is there. She describes this as being in another world.

"I am currently under seven medications and I'm still doing that. So if I wasn't on any medication, I'd be doing that constantly, all the time," she says.

"I saw a guy on the F train and he was talking to himself in the same mannerisms in which I talked to myself and I was like, you know, what's the difference between me and him? And the difference is that I have my support team of a family, friends and doctor, and if I didn't have that, I would totally be in his position," said Hammer.

Michelle says it's a way to give a voice to her community, especially those who otherwise could not.