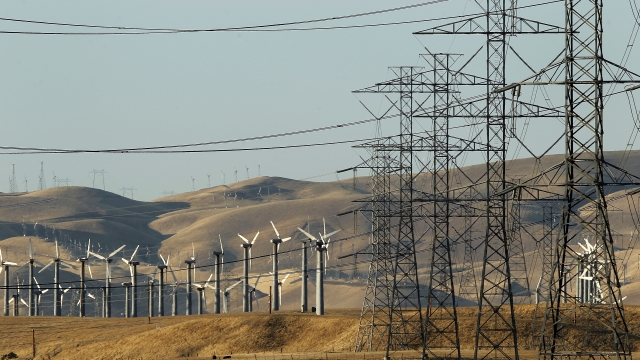 Over the last couple of years, federal law enforcement has been on high alert for potential attacks against a surprising target: power substations. With nearly 120 attacks across the country, 2022 marked a decade-long high of attacks at U.S. power stations.

There's a lot of variety in these attacks, from locations to methods, and no one group has claimed responsibility for these. That makes it hard for law enforcement to draw a definitive link between various attacks on power stations. But, there are some common threads.

First is the motivations. According to law enforcement, many perpetrators are hoping to create chaos and panic, and they often share ultra-nationalist or white-power ideologies.

To be clear, not every attack on a substation has white nationalist links. For example, according to the FBI, one attack in Washington state on Christmas seems to have been meant to knock out power so the perpetrators could commit a robbery.

What's more, not every investigation is complete.

But there's been enough of a pattern over the past few years for federal officials to take notice.

In June of 2020, three men claiming to be members of the far-right "Boogaloo" movement allegedly planned to attack a power substation to "incite violence" during Black Lives Matter protests. In August 2021, four neo-Nazis in North Carolina were charged with planning to take down a substation to create chaos "as a cover" for assassinations and other operations. In February 2022, three white supremacists pleaded guilty in Ohio for plotting to knock out the U.S power grid and cause a panic that could set off "a race war."

"There are many other reasons why people might attack substations or why there might be power failures that aren't related to extremist groups, but that said, there have been arrests for people who came close to pulling these things off from the white supremacist movement," said Heidi Beirich, co-founder and chief strategy officer of the Global Project Against Hate and Extremism.

Beirich has been a longtime extremism analyst and expert, and she points out infrastructure has been a popular target for decades.

"This sort of dream of taking down the electric grid or blowing up a nuclear facility to sow chaos so that you can launch a race war or engage in other activities has been the thinking for a long time," Beirich said. "The program on extremism at George Washington University looked at Islamic extremist attacks on infrastructure versus white supremacists and found that white supremacists keyed in more on the grid and electricity than Islamic extremists who are more interested in things like just destroying transportation, public transportation systems."

The white supremacist novel "The Turner Diaries" is often cited as a "manual of operations" for many white power groups. In a report, Department of Homeland Security found it's also been used as a rough blueprint for attacking government infrastructure, like in the energy sector.

Aside from some ideological patterns, there's another thread seen through most of the attacks: A common refrain from security and energy experts and government officials is that attackers "seem to know what they're doing."

In the Dec. 6 attack in North Carolina, for example, the gunmen knew the substation would knock out power lines for a particular county, and they were effective. It left about 32,000 customers without power or heat, with the country declaring a state of emergency and curfew. According to one former government official, the gunman also seemed to know where to access the site and what to shoot where no security was in place.

As of now, the investigation is still ongoing, so the motive hasn't been confirmed and no arrests have been made.

"The internet allows you to share materials like how to build a bomb, how to blow up a power station, how to use a rifle to disarm a substation," Beirich said. "But because we haven't done as much infiltrating and undercover work and monitoring of social media, which the federal government should be doing, we're behind the eight ball on dealing with this threat."

There is still speculation around these attacks, and despite some patterns, there's a lot of unknown about who's behind them. But one thing most can agree on is that these attacks highlight the U.S. power grid as an attractive target.

"We spent a lot of money fighting terrorism, right, of various kinds," Beirich said. "You'd think that we would put the money up to make sure that this nation's water supplies, gasoline delivery systems, electrical grid, etc. are functioning. It just, it makes no sense not to protect those systems."