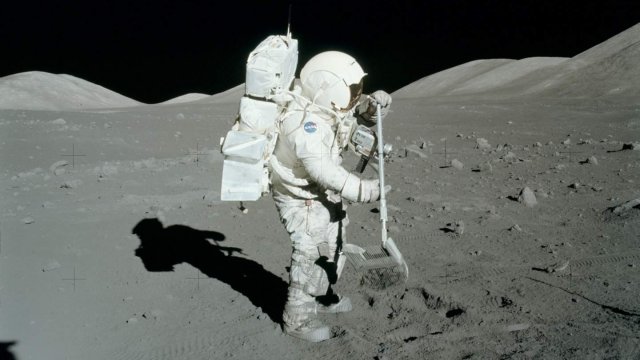 Apollo 17 marked the last time humans walked on the moon, but recent talks hint at a return.

It's been 45 years since humans last stepped foot on the moon. The astronauts of Apollo 17 began the final moon walk on Dec. 13, 1972, and when Gene Cernan re-entered the lunar module on Dec. 14, he became the last person to walk on the moon.

That legacy still looms over the U.S., where talk of returning has lasted decades. But it's important to remember everything those early missions accomplished and the scientific research they enabled.

Apollo astronauts brought back over 2,000 lunar samples during the program. According to Noah Petro, NASA space scientist and deputy project scientist for the Lunar Reconnaissance Orbiter, these samples gave us a better understanding of the moon and provided new insights into how other planets formed and the effect of impact cratering — a phenomenon that happens on every other solid object in the solar system except Earth.

"The samples that were brought back by the six Apollo missions to the moon have enabled unprecedented studies of the history of the solar system," Petro said. "It's the Apollo samples that really opened the window into the distant geologic past, the earliest processes in the solar system that we just don't have anywhere else."

Previous estimates said the moon's magnetic field existed until about 3.56 billion years ago, but new tests suggest it survived far beyond then.

Even though humans haven't done a lunar walk since the '70s, scientists have kept studying the moon with the help of robotic explorers. But that may soon change.

The Trump administration has expressed interest in returning humans to the moon. SpaceX plans to send two passengers on a flyby trip in 2018. And some commercial companies want to mine the moon for valuable resources.

But whatever drives us to put humans back on the moon, Petro said lunar science should remain a prominent focus.

"Going forward, there will be not only the scientific aspect, but my hope is that any exploration of the lunar surface is done with science as a priority, even if there is a sort of commercial aspect to it," Petro said. "What we can learn from the surface of the moon is fundamental for understanding all planets in the solar system, so the opportunity should not be ignored."