Sen. Klobuchar: Impeachment A 'Moment Of Reflection' In 2020 Race 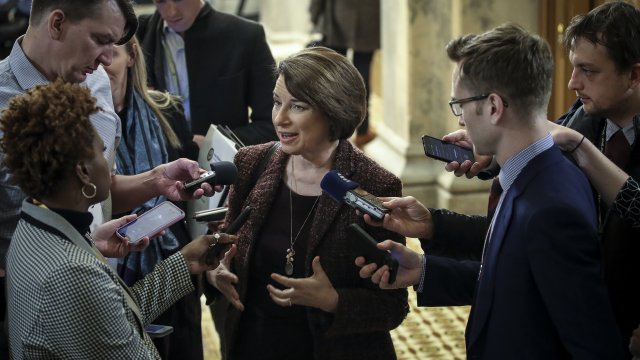 Sen. Amy Klobuchar is one of the four Senators who've been pulled from the campaign trail to serve in President Trump's impeachment trial.

Democratic Senator Amy Klobuchar is one of the four presidential candidates who've been pulled off the hectic pace of the campaign trail for a much more solemn task: jury duty in the U.S. Senate.

Klobuchar said, "I am used to going practically 24/7, town hall after town hall, answering questions, and then all of a sudden you're at like a digital detox. You're sitting in there, you can't look at your phone, you can't communicate, really. It's a moment of reflection about why I'm doing this and what our democracy is all about."

Senate Democrats tried unsuccessfully to admit witnesses and evidence into the trial, even — at the end of the night — floating the idea of allowing Supreme Court Chief Justice John Roberts to decide which witnesses to call.

Impeachment Trial Keeps Candidates In D.C. Ahead Of Iowa Caucuses

Sens. Michael Bennet, Amy Klobuchar, Bernie Sanders and Elizabeth Warren were in Washington D.C. Tuesday for the start of the Senate trial.

"We finally said, okay, let's let Roberts decide what witnesses and what evidence is relevant to this proceeding. They said no. And I think to me that just says it all," Klobuchar told reporters

Klobuchar is relying on a slew of local lawmakers to represent her while she's absent from the campaign trail. The other three senators who've been pulled away from the race — Bernie Sanders, Elizabeth Warren, and Michael Bennet — have also tapped surrogates to fill in for them while the trial is ongoing.