Manufactured snow might be the future of winter sports 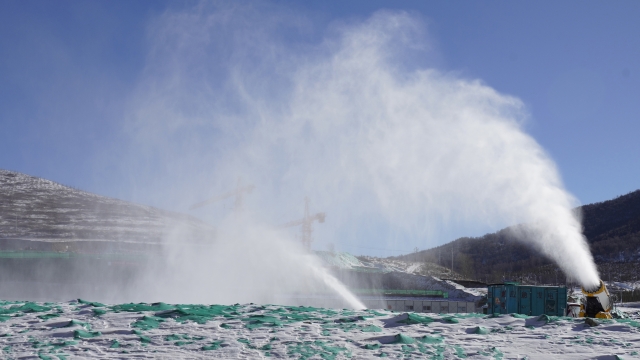 With unpredictable weather and warming temperatures, ski resorts are increasingly creating their own snow.

Across the planet, ski resorts big and small are increasingly having to rely on snowmaking technology in order to stay open. A January 2022 study by the Sport Ecology Group found as many as 95% of the world's ski resorts are using the technology.

"The weather's been miserable, absolutely miserable," said Jamison Stachel, general manager of Alpine Valley Ski Resort in Wisconsin. "It's been warm. It's been rainy. We're dealing with a lot of uncontrollable variables.”

So how exactly does one create snow, especially enough to ski on?

"It's an art form mixed with science," Stachel said.

Using dozens of “snow guns” equipped with hoses, compressors and fans, ski resorts are able to combine three ingredients to make snow: air, water and cold. But that’s only if the temperature outside is cooperating.

“You can't rob Mother Nature," Stachel said. "You can't beat her, but you can cheat her. So she gives me cold temperatures; I'll give the skiers and snowboarders snow. If we do not get 28 degrees wet bulb, we cannot make snow.”

The process is crucial to ski resorts, especially with unpredictable weather.

“We're always going to have to make snow in Wisconsin," Stachel said. "Even if we have a year of steady storms, it would be tough for the storms to keep up our snow here in the mountainous states. They're getting inches, feet, every day pretty much, so I would say 98% of our resort relies on our manmade snow.”

“Snowmaking is absolutely critical to our business," said Chuck Randles, general manager of Wilmot Mountain, another Wisconsin ski resort. "Here at Wilmot, we have received very little natural snow, and we're open with almost 50% of our terrain here in mid-January, despite not having any snow. That wouldn't be possible without snowmaking.”

So how does it compare to snow that falls from the sky? For starters, it’s not free.

“The art of converting water to snow is extremely sensitive and extremely pricey, so you want it to be as efficient as possible," Stachel said.

The snow guns themselves can cost anywhere from $5,000 to $35,000, and that’s not including the cost of operating the machines throughout the season. That can range from a couple hundred thousand to a few million dollars, depending on the resort. Then there's the cost of round-the-clock crews on snowmaking days.

“It takes a crew of about six on the overnight shift and a crew of about six during the day," Randles said. "That ranges from people who are working with our air compressors, to people that are working with our water pumps, to the people that are out overnight and during the day, checking on every single gun, every single hour.”

As for the feel of it, Randles says it's still like real snow.

“This is not artificial snow," he said. "This is snow that's made through a mechanical process, but it is real snow, which is frozen water. And when you're skiing groomed terrain, like most of our terrain here is in the Midwest, there's very little difference between machine-made snow and real snow. Now to simulate powder skiing like in the trees, an off-piste at larger mountain resorts, we're not quite there yet, but hopefully someday.”