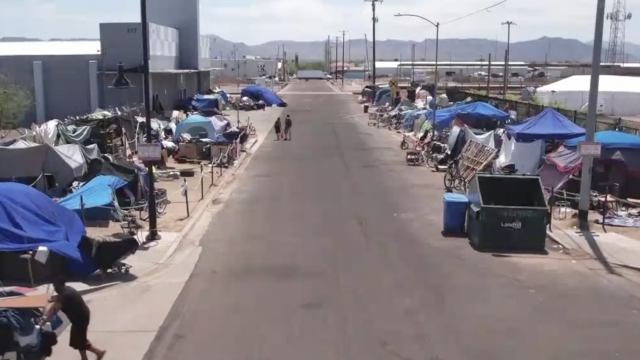 Phoenix, Arizona is one of the hottest cities in the nation.

"It feels like you're breathing in fire into your lungs," said Merrilee Parker, who lives in an Arizona shelter.

"Almost every single day we went on no less than three heat-related illnesses," said Captain Todd Keller, with the Phoenix Fire Department.

As heatwave frequencies intensify across the nation, extreme heat — the number one weather killer — is putting the most vulnerable at risk.

An area in downtown Phoenix known as the Zone is home to more than 800 people.

When it gets hot, finding shade is tough. It mostly comes from tents and shacks made out of scavenged material like pallets, blankets and tarps.

Much of Southern California remains under an excessive heat warning, with the state's grid operator warning of record temperatures.

To tackle the hazard of scorching urban temperatures, Phoenix created the first official city-funded heat response office in the U.S.

David Hondula is the director of Phoenix's Office of Heat Response and Mitigation.

"More people are dying from heat in our county and region than ever in recorded history," Hondula said.  "Our mission out here is to try to reduce the number of heat-associated illnesses and deaths in the community, particularly among our most vulnerable neighbors.”

Hondula said he know public health risks associated with heat will continue to rise as there are more hot days, which can quickly turn deadly.

"We're the first city to really experience this kind of heat, so we're really reactive," Olesiewicz said. "We're also setting the stage for what other cities need to do in the future as cities get hotter."

California now has a statewide "flex alert" to conserve energy to help the state avoid rolling blackouts amid triple-digit temperatures.

Newsy walked the streets of Phoenix with the heat team, as they handed out sunscreen, cold water, hats and maps for cooling shelters.

"We look at the 9-1-1 call data that comes in, and we try to visit the hot spots for the heat-related calls," Hondula said.

The city is strategically planting trees along busy walkways. Their goal is to create 100 cool corridors by 2030, and it dug into its first planting project in April.

The seemingly bureaucratic measures may actually save lives, especially in the Zone.

"Maybe like four to five months since I've been here, the heat related deaths that I know of are at least 10," said Warren Smith who lives in the Zone.

The crew packed up for the evening, but they’ll be back again when the sun is scorching.