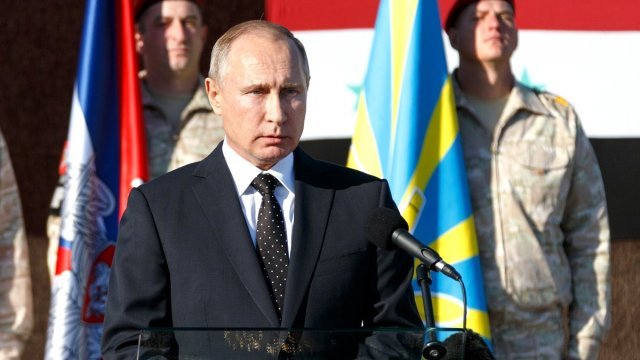 Office of the Russian President

During a brief visit to Syria, Russian President Vladimir Putin announced he'd withdraw many of the Russian troops currently stationed in the country.

Putin met with Syrian President Bashar al-Assad, who reportedly thanked the Russian leader for helping fight off what he called "terrorism" in Syria. Putin's trip also included stops in Turkey and Egypt.

The announcement follows major losses for the terrorist group ISIS in Syria. The Syrian government announced in November it had chased ISIS out of its last major stronghold in the country, almost a month after U.S.-backed rebel forces seized the terrorist group's de facto capital, Raqqa.

But Assad's definition of "terrorists" also includes the rebels who have been waging war on his government for six years. Russia's air campaign has helped keep Assad in power through a civil war that's claimed hundreds of thousands of lives.

Putin says at least two Russian bases in Syria will keep operating and warned he might step up military action in the future.