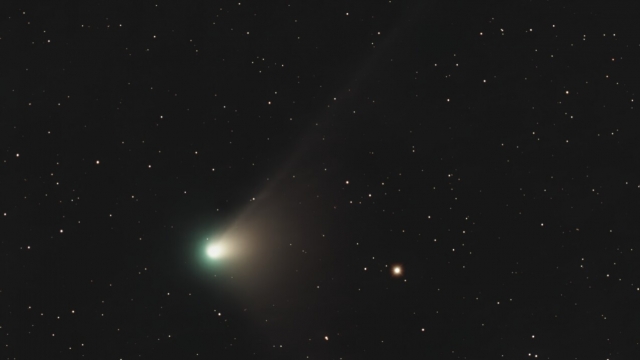 A comet named C/2022 E3 (ZTF) will get closer to Earth this month and astronomers say it should be pretty visible to you and me. Some communities are referring to it as the Green Comet.

“This one is predicted to get to about 5th magnitude. Fifth magnitude is about as bright as a star that you can see with the naked eye at a reasonably dark site,” said Bart Fried, the executive vice president of Amateur Astronomers Association, Inc.

Why the complicated name?

“It was discovered by an automated system, that's the ZTF part of the name,” he said.

This particular comet came from really far away. Theoretically, from the edge of the solar system in a big cloud called the Oort cloud.

The comet hasn’t come this close to Earth for 50,000 years, supposedly, because the orbital period is said to be about that length. That means the last time it would have been visible from Earth was during the last ice age.

It is forecasted to be the brightest on January 31 and February 1. Experts say it will be the most visible during predawn hours in the Northern Hemisphere because it climbs highest in the sky just before dawn. When the comet is at its closest approach, it should appear near the north celestial pole.

If you want to see it for yourself, experts have tips on how you can make sure to catch it.

“You want to be away from the city,” Fried said.

Light pollution in urban areas can hinder your view. The phase of the moon also plays a role. The darker the moon, the better for viewing things in space. The comet will likely be visible near the Camelopardalis constellation in early February, which is best seen in the morning hours.

Experts also recommend having binoculars and finding a cloudless view of the horizon where the comet is predicted to be.

One way to plan where to look is by using a planetarium program or a sky map. The location will be different depending on where you live.

“The easiest way I’ve found is to get a planetarium program…some of them are free,” Pineda said. “Once you have one, it displays on your screen, you can search for an object.”

Fried said it’s important to remember comets can be unpredictable. Things can change: the comet may not brighten further, or sometimes they’ll break apart. On occasion, they crash into the sun, but that’s not expected to happen to this comet.

“That being said, there’s a pretty good likelihood this will be a good comet,” he said.