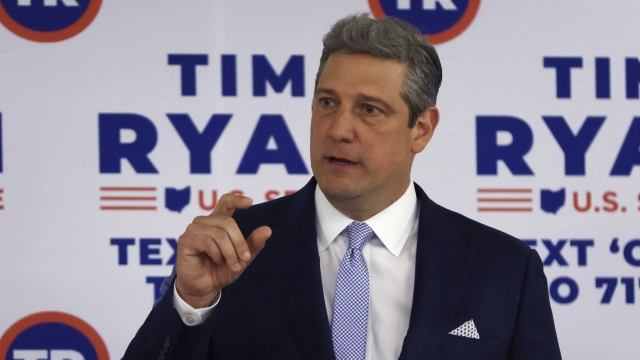 According to a Cygnal poll, some 8% of likely Buckeye state voters are still undecided on choosing Rep. Tim Ryan or J.D. Vance in the Senate race.

J.D. Vance is closing out a hard-fought U.S. Senate campaign with a new pledge to voters at a Fox News Town Hall Tuesday night.

It's a page from his Democratic opponent's playbook. And his rival Tim Ryan told Newsy he wasn't buying it.

On Wednesday, Vance stuck to his bipartisan message at a campaign stop in Defiance, Ohio.

"Certainly, if I have to work with Republicans or Democrats to get things done for the people of Ohio, that's exactly what I'm going to do," Ryan said.

According to a late October Cygnal poll, around 8% of likely Buckeye state voters are still undecided.

But even with a new message of bipartisanship, Vance is standing by his support of former President Donald Trump, whose endorsement was a decisive factor in Vance's victory in Ohio's May Senate primary.

On Monday, Vance is slated to appear alongside Trump at an Election-eve rally in Dayton, Ohio.

"Look, we really feel — I feel like I'm in a good place in this race," he said. "People need to get out there and vote. And hopefully, the rally will remind people that there's an election the next day, and they got to make sure their voices are heard."

Vance has also benefitted from an infusion of over $32 million in spending from a Mitch McConnell-aligned Super PAC, according to non-profit Open Secrets, while Ryan has struggled to make his case to national Democrats, who have largely declined to pour money into Ohio's Senate race.

Following Which States Are Spending The Most For Midterm Elections

One estimate says $8.8 billion will be spent on this year's campaigns. For perspective, $3.9 billion was spent in the last big midterm in 2018.

Ryan told Newsy the race will be close and he's in a sprint to the finish line, even without the financial support of national Democrats.

"I don't want any of their money at this point," he said. "We've gotten this far without them. We don't need their money. I'm gonna get in there and I'm gonna be the absolute most Independent senator, this country has ever seen."

Congressman Ryan is also courting Republicans in this race, hoping voters will split the ticket between him and popular incumbent Republican Gov. Mike DeWine, who has been polling far ahead of his Democratic challenger Nan Whaley. It all could come down to split ticket voters in Ohio.