Richard Spencer Spoke (And Shouted) At The University Of Florida 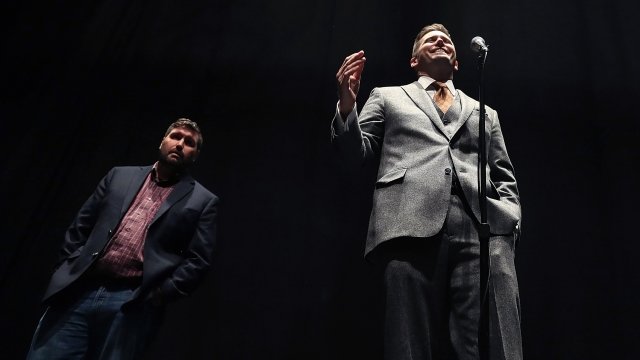 The white nationalist accused protesters of violating his freedom of speech.

On Thursday, Richard Spencer gave a speech at the University of Florida. But the speech quickly turned into something else: a shouting match.

Both inside and outside the venue, people protested against racism, fascism and hate — which many link to Spencer's rhetoric and ideology.

Despite the protests, Spencer continued his event and thanked University of Florida President Kent Fuchs for giving him a platform to speak.

"I would also like to thank President [Kent Fuchs], who understands the importance, ultimately, of free speech," Spencer said.

Before Spencer's speech began, President Fuchs said on Twitter: "For the record, I don't stand behind racist Richard Spencer. I stand with those who reject and condemn Spencer’s vile and despicable message."

The university clarified online that no campus group invited or sponsored Spencer's event. But as a public institution, the University of Florida couldn't prohibit the white nationalist from speaking publicly.

UN Warns US To Fight Racism After Charlottesville

The United Nations issued a warning to the U.S. to condemn racist speech and crimes.

That freedom to speak came with some concerns of violence.

Spencer reportedly calls for "peaceful ethnic cleansing" in his advocacy for white nationalism. His last major public appearance in Charlottesville, Virginia, left one woman dead and several others injured.

In the days leading up to the event, officials prepared for the threat of violence. On Monday, Florida Gov. Rick Scott signed an executive order declaring a state of emergency for the county. This increased law enforcement efforts to help keep the peace.

The University of Florida said more than $500,000 would be spent for enhanced security on campus, as well as in the city of Gainsville.