South Korea's President Promises Citizens 'There Won't Be Another War' 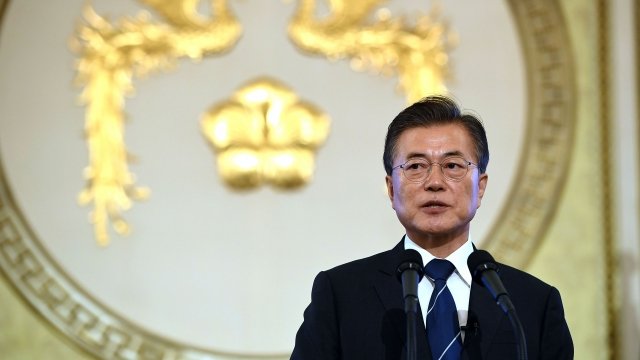 South Korean President Moon Jae-in said during a news conference Thursday that "there will not be a war again on the Korean Peninsula."

Tension on the peninsula has been high for weeks. North Korean leader Kim Jong-un has been in a war of words with U.S. President Donald Trump, and both sides have threatened military action.

But, Moon said he's still willing to take a diplomatic approach to help resolve the ongoing conflict with the North.

But a diplomatic resolution could be hard to reach with South Korea and the U.S. beginning military exercises next week.

The two nations conduct these exercises every year. The drills typically enrage the North, and experts say this year's reaction could be worse, given the current situation.

The rhetoric between North Korea and the U.S. has cooled off in recent days.

After threatening to fire missiles near Guam, Kim Jong-un took a step back this week, saying he would "watch a little more [of] the foolish and stupid conduct of the Yankees" before deciding to strike.

And Trump later praised the decision as "very wise and well reasoned."