Leaders In The Technology World Want To Reprogram Digital Education 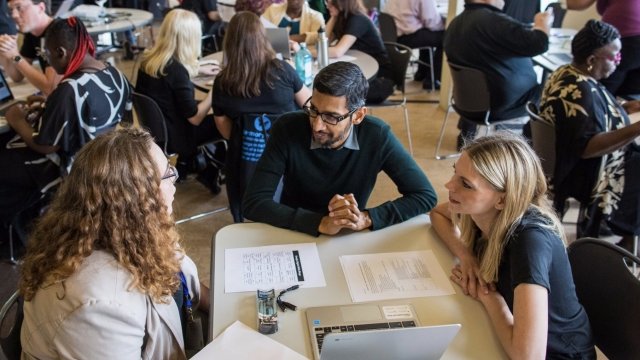 Woz U and Grow with Google both hope to make tech education more accessible.

Technology is rapidly changing the workplace, and these new efforts are trying to help humans keep up.

Woz U, developed by Apple co-founder Steve Wozniak, and Grow with Google, an initiative announced by Google head Sundar Pichai, both offer personalized programs for coding and tech education.

In an announcement Friday, Wozniak said the goal of Woz U "is to educate and train people in employable digital skills without putting them into years of debt."

The program offers online curricula, but the organization is also planning on working with companies and schools to train and recruit burgeoning tech talent.

Gender Bias In Open-Source Coding May Be Tech's Latest Setback

Researchers looked at GitHub, a software repository, to see if there was proof of gender bias.

Pichai unveiled Grow with Google the day before Woz U was announced. Like Wozniak, Pichai focused his announcement on education and training, but added praise for the internet as "a powerful equalizer."

Beyond helping people get into the tech industry, Grow with Google also hopes to help small businesses and startups use the internet and technology to grow.

Grow with Google's programs will also be available online, but the organization plans on hosting workshops around the country. The company even announced it would give $10 million  — the largest grant Google has ever given to a single organization — to Goodwill. The two companies will work together to offer career coaching from Google employees.

But these programs come at a time when Silicon Valley companies like Google are being scrutinized for their effects in the workplace. Earlier this summer, Google's Digital News Initiative helped fund a robot-driven news service.

At the same time, the tech industry is growing. Back in April, USA Today reported that tech companies employed 6.9 million people in 2016.