The Diplomatic Effort Behind The Swap Of Brittney Griner 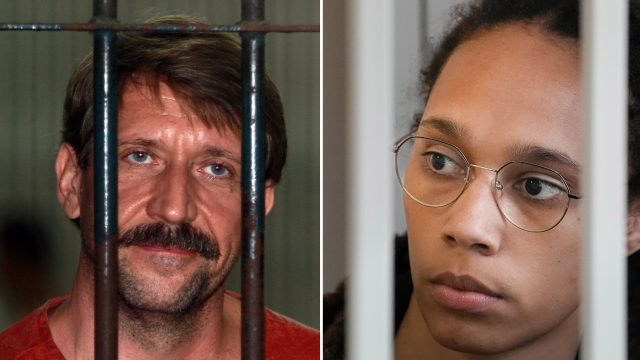 The efforts to secure Griner's release resulted in the highest-level diplomatic contact between the U.S. and Russia in months.

Brittney Griner’s release comes after months of tense negotiations during a low point in U.S.-Russian relations. Her initial arrest came one week before Russia’s invasion of Ukraine. The efforts to secure her release resulted in the highest-level diplomatic contact in months; a phone call between Secretary of State Antony Blinken and Russian Foreign Minister Sergey Lavrov.

"We put forward, as you know, a substantial proposal that Russia should engage with us on and what Foreign Minister Lavrov said this morning and said publicly is that they’re prepared to engage through channels we’ve established to do just that and we’ll be pursuing that," said Blinken.

But Russia, at the time, turned down the reported offer of convicted arms dealer Viktor Bout for Griner and Paul Whelan.

Whelan is a former Marine and corporate security executive and has been jailed in Russia for nearly four years on espionage charges the U.S. says are meritless.

The former U.S. ambassador to the U.N., Bill Richardson, joined the back-channel negotiations, along with his top deputy, Mickey Bergman. Richardson is a frequent envoy in hostage talks. Senior administration officials say the Russians rejected every proposal for Whelan’s release, insisting on a one-for-one exchange.

"Sadly, for totally illegitimate reasons, Russia is treating Paul's case differently than Brittney's, and while we have not yet succeeded in securing Paul's release, we are not giving up," said President Joe Biden.

In an interview Thursday by phone Whelan emphasized the urgency for securing his release.

"I would say that if a message could go to President Biden, that this is a precarious situation that needs to be resolved quickly," said Whelan.

Whelan’s brother says it was right to make a deal that was possible instead of waiting for one that wouldn’t happen. He says it’s clear the U.S. didn’t have concessions the Russians wanted.

"The Kremlin is particularly focused on parity, on getting equal things, and so if they have labeled Paul as a spy, [it] may be that they're waiting until the U.S. government captures a spy you can offer that as a trade. That's the only thing I can imagine. But it's hard to know and it's clear that whatever it is, the U.S. government doesn't currently have it," said David Whelan, Paul's brother.

In a tweet, Secretary of State Blinken said "we will not cease our efforts until Paul Whelan is back with his family too."

Senior administration officials say the swap came together in 48 hours and took place in Abu Dhabi. The U.S. thanked the United Arab Emirates and Saudi Arabia for facilitating the exchange. Both of those Gulf nations maintain relationships with Russia.