Trump's Comments About North Korea Seem To Be Getting Stronger 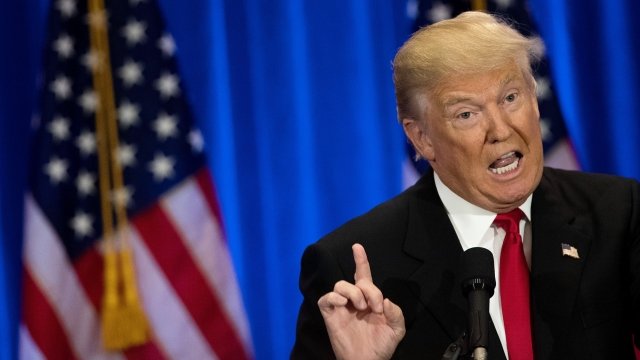 During a press conference, President Donald Trump said he is considering some "pretty severe things" in response to North Korea's missile tests.

President Donald Trump wants to crack down on North Korea.

"It's a shame that they're behaving this way. But they're behaving in a very, very dangerous manner, and something will have to be done about it," Trump said Thursday during a press conference with Polish President Andrzej Duda.

During the press conference in Poland, Trump told reporters he is considering some "pretty severe things" in response to North Korea's most recent missile test.

The North has conducted at least 10 missile tests since Trump took office in January.

And Trump's responses seem to have gotten tougher with each test. Take his first public response as president — it was just one sentence.

From there, his statements became more pointed.

"We have a potentially very bad situation that we will meet in the toughest of all manners if we have to do that," Trump said May 1 in an interview with Bloomberg.

"The era of strategic patience with the North Korean regime has failed. ... And frankly, that patience is over," Trump said June 30 during a press conference with South Korean President Moon Jae-in.