US Tests Missile Defense System To 'Stay Ahead' Of Threats 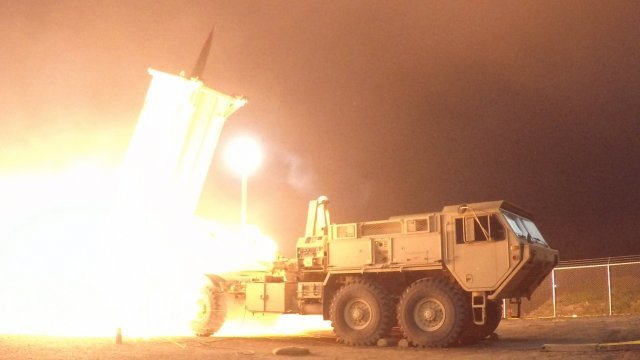 The U.S. Army launched the missile Sunday over the Pacific Ocean. Crews then used the Terminal High Altitude Area Defense, or THAAD, system to intercept and destroy it.

The director of the U.S. Missile Defense Agency said the test would help the U.S. "stay ahead of the evolving threat."

The threat he was most likely referring to? North Korea.

North Korea's missile program has been growing rapidly. It's also been making threatening statements toward the U.S. On Friday, the country launched its second intercontinental ballistic missile test in less than a month and claimed it could strike anywhere in the the U.S.

That's probably an inflated claim. But Friday's missile was reportedly more advanced than the first, which had the range to reach Alaska. A North Korean news outlet called Friday's launch a "grave warning" to the U.S.

Some analysts think North Korea could have a reliable ICBM capable of transporting nuclear warheads within the next year.

The U.S. isn't ignoring the country's actions. On Saturday, it sent two Air Force bombers over the North Korean peninsula in a show of force.

A commander of the U.S. Pacific Air Forces said the U.S. is willing to use "rapid, lethal and overwhelming force" against North Korea if necessary. He also called the country "the most urgent threat to regional stability."

The Missile Defense Agency hopes to use data from Sunday's missile test to further enhance the THAAD system.