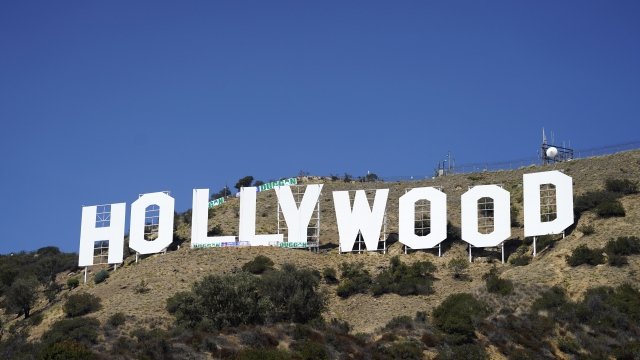 The Hollywood sign is turning 100 and as an early gift it got a facelift. A crew used more than 400 gallons of paint to give the letters a fresh glow.

But the nine letters, which — today — represent the glitz and glamour of the entertainment industry, were originally just a big billboard.

The year is 1923; Calvin Coolidge enters the White House; the Yankees play their first home game in the old Yankee Stadium, and TIME Magazine publishes its first issue.

Out West, Los Angeles is now the well-established movie capital of the world — with a perfect climate for shooting year-round, and America is movie-crazed.

More than 40 million Americans went to the movies each week by 1920.

As the industry grows, so does Los Angeles' population.

The sign was meant to be a temporary advertisement, but it became ubiquitous with the town and its entertainment industry.

After years of decay, the city of Los Angeles took over the sign in the 1940s. It removed the lights and the "land" section, so that it better reflected the town and not the original housing development.

Decades later, after more decay, the city decided to rebuild the sign.

Playboy founder Hugh Hefner hosted a gala where celebrities bid to sponsor the new letters, and in 1978 the city knocked down the sign and put new letters up.

It's gotten a few face lifts since then, including a fresh paint job ahead of its 100th birthday.

Today, the letters stand 45-feet tall and remain a symbol of a town where stars are born, and dreams are made: Hollywood.