Why Is Chicago Against Ketchup On Hot Dogs? 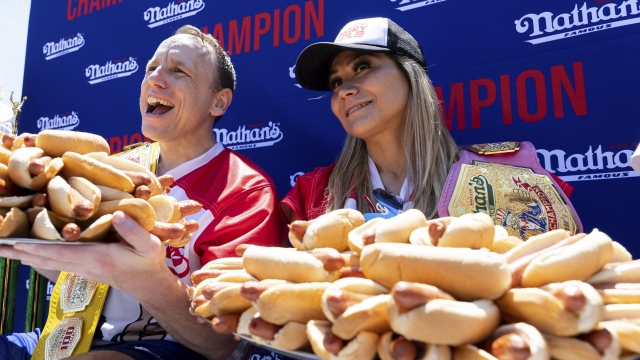 Many Chicago natives say they have the best hot dogs in the country, but is that true? Newsy's Meg Hilling dug deeper to find out.

Chicago takes its food seriously.  Maybe you've heard of their pizza? It's deeper than yours. And when it comes to their hot dogs — don't even think about ordering ketchup. Chicago's disgust may be best summed up by Dirty Harry in the 1983 thriller, "Sudden Impact."  "You know what does bother me? You know what makes me really sick to my stomach? Watching you stuff your face with those hot dogs. Nobody, I mean nobody puts ketchup on a hot dog," said Harry.In Chicago they've perfected the hot dog. Newsy went to an expert to get the lowdown: Doug Sohn, the founder and president of Hot Dogs Incorporated.So what makes a perfect Chicago dog?

For The Love Of Ketchup

A D.C. couple is putting a spin on the classic tomato-based condiment.

"That's easy. You start with a steamed poppyseed bun. It is an all-beef natural-casing hot dog, topped with yellow mustard, a little diced onion, neon green sweet relish, some tomatoes, dill pickle and sprinkle of celery salt, then sport peppers. These little hot peppers," Sohn said. "That is the classic Chicago hot dog." There's growing consensus that this is the way to do it. The National Hot Dog and Sausage Council — yes that's a real thing — says don't use ketchup on your dog after the age of 18.  But why are they so particular?  To be frank, part of it might be that we relish the chance to tell non-Chicagoans they're doing it wrong. But there might be some food science behind it too. A newspaper column from 1991 claimed "ketchup smothers the flavor of the hot dog because ketchup makers add sugar to their products."In other words, ketchup would mask the rest of what we have going on. So what happens if you commit the faux pas?

Why Do Hot Dogs And Buns Come In Different Counts?

The then-candidate for Illinois Governor Bruce Rauner was grilled by locals after ordering a dog with ketchup in 2014. His campaign said it was for a staffer.

When presidential candidate John Kasich came to town a year later, he made sure not to alienate Chicago voters.

We're not saying it could be the difference in an election, but you never know.

While ketchup on a dog is frowned upon, even true Chicagoans know America is a country of freedoms.

"Honestly, do whatever you want, but I personally think the flavors don't match and it's not gonna be as good," said Sohn.

"I think that having sweet elements, tart elements, crunchy elements, salty elements to it, really kind of creates this full kind of flavor profile but mouth feel as well. I think it's one of the rare complete dishes."