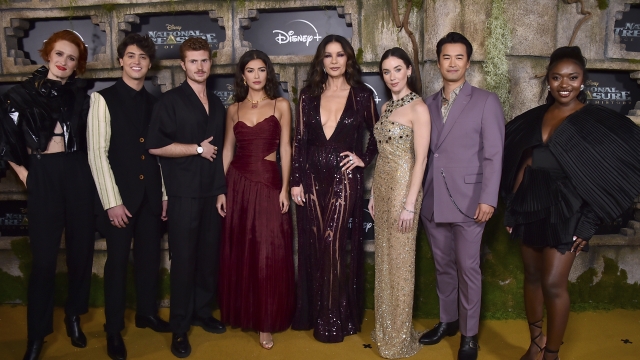 It's been almost two decades since the debut of the action-adventure film "National Treasure" starring Nicolas Cage. Now as Disney reboots several of its fan favorites for new and old fans, the franchise is back on the small screen with the spinoff "National Treasure: Edge of History," introducing audiences to a new generation of history buffs and treasure hunters.

"'National Treasure' is all about these big set pieces, this action, and we get to deliver that in every single episode," said Lyndon Smith, who plays FBI Agent Ross. "So, I just hope that people get to view this almost as movies two through ten."

"With what you get with a series, you can really dive deep into the characters and the relationships and the nuances," said Jordan Rodrigues, who plays Ethan.

The new series, which premiered in December, takes audiences on a treasure hunt through South America and, just like its predecessors, has characters solving puzzles found in major landmarks and historical artifacts.

Streaming Is Changing How Companies Make Money, For Better Or Worse

Streaming companies are prioritizing how to get and keep subscribers, but the risk in producing new or buying old shows is much higher.

"The cool thing about doing this 20 years later is we'll get the fan base, the people who loved the movies, but then we're also a younger group, and we'll really open it up to that younger generation and the teen generation, the early 20s," Smith said. "We talk about social media, there's all that stuff. So I think we hopefully are successfully throwing out a really wide net to get a good audience."

"Edge of History" is one of several new reboots and revivals on Disney+ as the company continues to grow its streaming platform, which currently boats more than 164 million subscribers globally. So far, it has put out a sequel to the 1993 film "Hocus Pocus," a limited series based on "The Santa Clause" movies starring Tim Allen, and a series inspired by the "High School Musical" film franchise.

As "Edge of History" continues its first season into February, the studio is reportedly in talks with actor Nicolas Cage for a third feature film. The original two "National Treasure" movies made more than $392 million at the domestic box office.