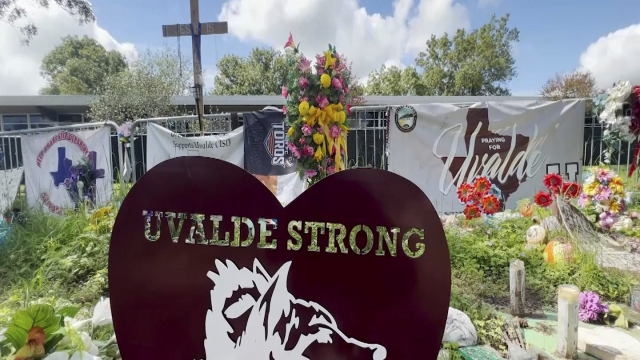 Parents and community members were walked through the latest design of the rebuild after a mass shooting at Robb Elementary School last year.

Student security in schools is at the heart and center of Uvalde, after a mass shooting at Robb Elementary School rocked the small Texas town.

He walked parents and community members through the latest design of the new elementary school and pointed out key security features.

"The entrance to the building for visitors will be here. It'll be a secure vestibule that they have to show credentials and enter in order to get into the rest of the building," he said.

The design team and special community advisory committee say they focused on three key topics when they began to map out the school: safety and security, academics, and health and wellness.

The new elementary school is designed with an enclosed courtyard that turns school walls into a shield. Several areas will also have steel walls with tiny holes for air circulation and increased protection, and a fence — more than 9 feet tall — will surround the school perimeter.

Miller says the design is a collaboration, adding that they visited other schools, held several meetings for community input and consulted the Department of Public Safety and EMS.

"I'm excited for March to see more of the 3D version of it. And that really does make me feel better because I, honestly, was highly considering moving," Uvalde resident Jessenia Baez said.

Baez' daughter is only 3. She says the tragic shooting at Robb Elementary that left 21 dead made her realize that now is the time to speak up and give input on her daughter's future school.

Committee members say input from the families of victims of the mass shooting also played a role.

"Our group has met with the families — privately with them, as well — and shown them the design to be as transparent as possible so that way, they can see and they they can tell us, 'Hey you're going the right way,' or 'No, can you make this little change?'" Moving Forward Foundation and UCISD School Board President Luis Fernandez said.

The new school will be built on donated land next to another elementary school and near Uvalde High School. It will cost an estimated $60 million.

Once the design is finalized and approved, the school district could break ground as early as June.

"We've had new buildings pop up, but they're very basic," said Lalo Diaz, who is co-chair for the advisory committee. "And now, we're going to be able to have a school that has technology, labs, instructional design."

A design some say will finally catch up with the times to protect the most vulnerable in their community.

Natalie Arias is the academic dean at Uvalde High School and co-chair for the community advisory committee. She's also a mother of three.

"Just knowing that we're moving forward and that our community is getting a taste of some of the progression that the rest of the world has gotten to experience that we don't always get to get in Uvalde," she said.

Progression with the help of state and federal funding and in-kind donations and contributions from people wanting to help from near and far.

Officials are working with the families of the victims of the mass shooting to see if they can include a tribute to the lives lost at the new school. Construction is expected to run through October 2024.